With tomorrow’s historic election looming large over the landscape of America, I thought I’d take a minute to weigh in to get my official prediction on the books. I neglected to do so in 2016, largely because I didn’t want to get too political too quickly, but this time I feel pretty comfortable going on the books.

Those of you who know me personally know that I was one of the few people to correctly predict a Trump victory and went as far as placing a bet on him to win before he had even won the primary. In the election I correctly predicted 48 of the 50 states (missing Michigan and Wisconsin). I do not predict the popular vote, because much like yards in a football game or hits in a baseball game it doesn’t matter. If I’m predicting, I’m going for the final score only.

So needless to say right now I’m, at best, a stopped clock that’s been right at least once a day. I was also very sure about both Obama wins, but who wasn’t. Same thing with Bushes re-election. Again, an easy one. This election is probably the hardest one of my call in my lifetime. So why go on record now? Why not just sit it out?

First off, (spoiler alert) I disagree with the polls and I would relish defeating the experts. One of my friends (shoutout to the WDW Loop), predicts the NCAA tournament each year. And he routinely defeats so called “bracketologists” whose full time job it is to predict the tournament field. Mind you, it’s usually not all that close either. He whips these guys. It’s pretty cool. So, I figure I’ll take a crack at it this time. This is the map I think we see: 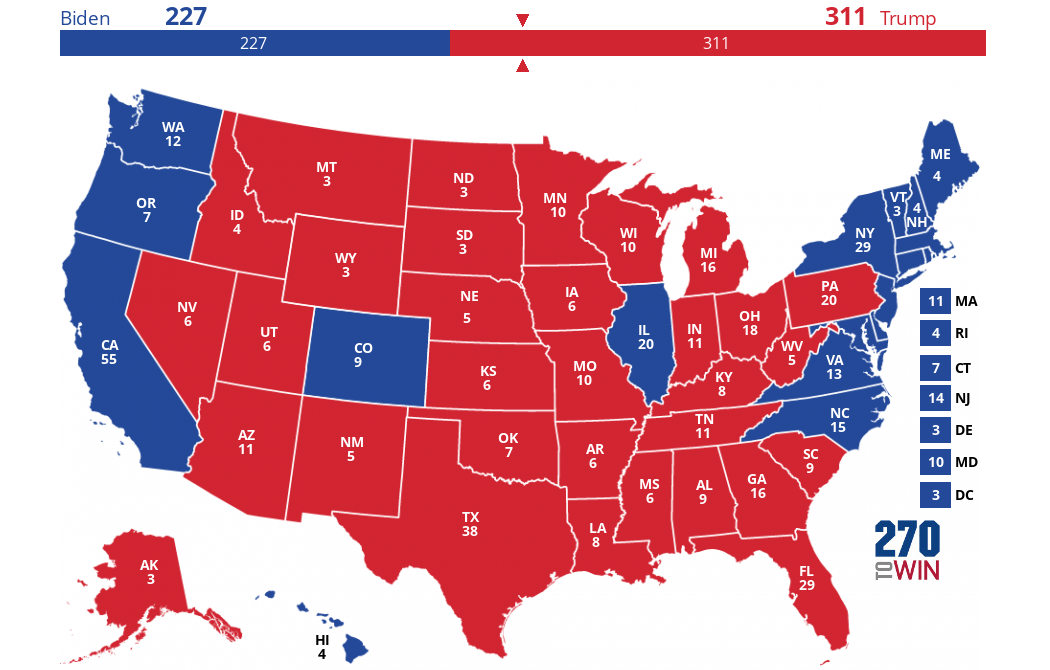 I think this is the map, though I’m admittedly least sure about North Carolina, Minnesota, Pennsylvania, and New Hampshire. Even in a best case scenario in that model, the my best case scenario for Biden still leaves him 13 votes away from getting to the magic number of 270. if he can do that, and secure Michigan, he’ll have a chance to sneak to 273 and in the nomination. I believe this is his best chance. Why do I see the map unfolding this way?

Overall, I think it’s going to be a hotly contested race here the outcome isn’t certain for weeks or perhaps even months. The media has already begun talks of a red mirage and I imagine a lot of states that are called for Trump will drag on as new votes begin to appear or be processed. I would expect Biden not to concede for some time as the Democrats fight tooth and nail to process these votes. Ultimately, I believe they’ll be denied in a similar process to how 2000 shook out and the new narrative around Trump will be one of a true political despot, a dictator who will go as far as rigging elections to secure his power.

Or, you know, Biden just rolls. I have a hard time buying it. If he would’ve run in 2016, I think he would’ve run, for the record. I just don’t think it happens this year.

Lastly, regardless of who you’re rooting for or if you agree with me or not, get out there and vote tomorrow. Don’t be the guy who sits at home and then bitches about things for four years. Do your research and get some skin in the game. Democracy depends on it.